white clouds drift on and on 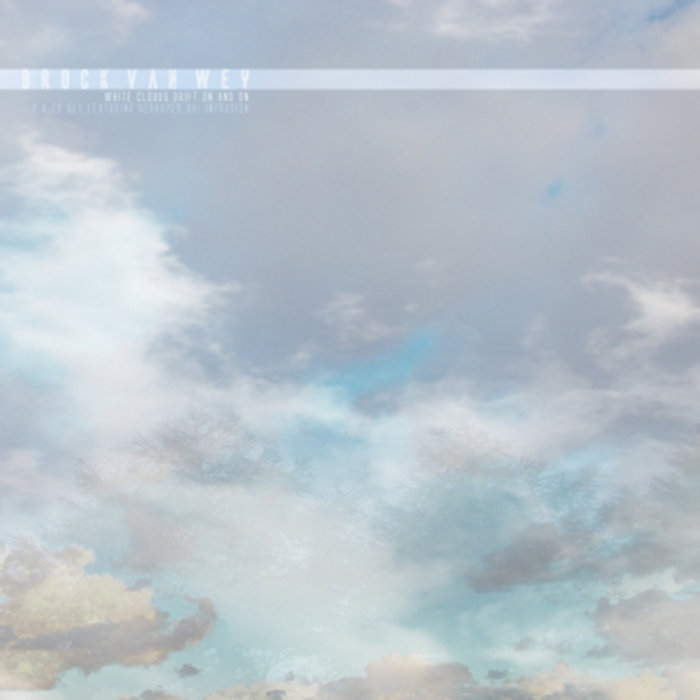 Scott Dreamy! Intrusion's subtle beats don't really intrude at all. And wouldn't you know it, my favorite track is the one that's on the LP but not in the download: A Chance To Start Over (Intrusion's Under a Starlit Sky mix). Another good reason to pick up the vinyl!

Will I have literally struggled to say words about this album, but I'll try. If someone could take the purest emotions and run them through a looping analogue tape machine while angels sang funeral songs in the background, then this is what it would sound like. This is the death of something, but certainly not the end of it. I don't know what, but, oddly enough, I kind of want to know. Not many albums capture pure emotion like this one. Buy this one immediately. Favorite track: "a gentle hand to hold".

keep watching. at least one profile touches you deeper🙂 better than nothing i guess.

If you're old-fashioned enough to hear Brock Van Wey's mammoth debut on CD, take a look behind the tray. There you'll find a quotation from one Wang Wei (701-761):

Dismounting, I offer you wine.
And you ask, "Where are you bound?"
You say, "I've found no fame or favors;
I must return to rest in the South Mountain."
You leave, and I ask no more -
White clouds drift on and on.

If you find that a bit much, you're in the wrong place; as Van Wey himself would tell you, his music is intensely personal, deeply emotional and unafraid of seeming too sentimental or pretentious to those unwilling to take it on its own terms. It's the kind of uncompromising approach that's led to fervent fans and alliances with like-minded labels, and now Van Wey becomes the first "outside" artist to release something on the storied and impeccable (and sometimes monomaniacal) Echospace label.

Aside from staking his claim as an unabashedly private and poignant artist, though, the above quotation points to the feelings contained by Van Wey's restless, roiling, profoundly beautiful ambient music. The tracklisting here might begin evoking regret, loss and isolation, but even then the compassionately seething mix of chords, voices and static and Van Wey's mastery of emotional tone makes White Clouds Drift On and On more comforting than alienating. In some ways this is the anti-Untrue; both Van Wey and Burial long for the way "the scene" used to be and want above all else to make personally resonant music. But where Burial evokes a precise variety of urban loss and ennui, Van Wey takes us out of the city and even out of ourselves; White Clouds Drift On and On could be the soundtrack to an endless freefall, the world's most gentle rollercoaster, restless sleep, a place where nothing ever hurts.

For the 77 minutes of the first disc, the listener is cast gloriously adrift, without many reference points. Saying that "A Chance to Start Over" is Eluvium mixed with Gas or that the opening "Too Little Too Late" could be a beatless, melted version of The Field played over a string arrangement only partially explains what they sound like, and doesn't at all sum up their beauty. On its own, Van Wey's work makes for one of the most striking, flawless and outright gorgeous ambient albums to come along in a while. As a result the second disc is almost a bridge too far; Echospace's Steve Hitchell (AKA Intrusion) loved Van Wey's work so much that he offers a full 79 minute dub techno take on White Clouds Drift On and On. The result confirms Van Wey's contention that what he does isn't dub in any sense. For fans of the label or of deep, luscious dub techno the "Intrusion Shape"s of the second disc are gravy, but crucially it sounds like nothing more than a really good Echospace album. That's nothing to sneeze at, but Van Wey's own work sounds like something else entirely.

As Bvdub, Brock Van Wey pokes holes in the fabric between dub and ambient music. On his first release under his own name, White Clouds Drift On and On, he discards drums and bass entirely, producing his finest work yet in the process. The tracks are built from tapered, drenching loops of tone, massed in respiring pulses. The music beats, shivers, yawns open. The album's title, while almost comically generic, is apt: without drums, it's wonderfully unimpeded, like a huge pendulum slowly spending its energy. We would get that it's Van Wey's most personal work even if it weren't for song titles like "I Knew Happiness Once"-- the tracks are sensitively inhabited, with a human ache in every cascade.

Though Gas is Van Wey's most obvious forebearer, traces of modern minimal techno and dubstep echo in the distance. You can detect the Field on "A Gentle Hand to Hold", where an idyllic guitar loop slaloms lazily through voices as evanescent as soap bubbles, and Burial on "Too Little Too Late", with its gauzy clatter, and vocal information about rapture and pain. The album's emotional depth makes itself plain, but it has a conceptual dimension as well: It lies on a continuum of deconstruction. Dub itself is already an abstraction of something else; White Clouds is an abstraction of dub; and the bonus disc-- a series of interpretations by Stephen Hitchell, as Intrusion-- abstracts White Clouds. Hitchell breaks up Van Wey's glaciers into ice chunks floating on vast seas, sometimes gathering them back up with nets of percussion. The second disc also stretches the total play time to upwards of two and a half hours. This amplitude winds up being important.

White Clouds is immediately pleasurable for the opulence of its sounds. From the unhurriedly swooping strings of "Too Little Too Late" to the tinkling piano in an engulfing corona of drones on "A Chance to Start Over", Van Wey cultivates an unremitting sense of majesty and loneliness. But to praise ambient music for prettiness is like praising a house track because you can dance to it. Epic pace and scale are what push White Clouds over the border between pretty and awesome. The deliberate pace screws with your perception of time, and minutes melt away unnoticed. When "I Knew Happiness Once" finally begins to swirl around the drain, I'm always astonished that 16 minutes have elapsed. Van Wey lets his parts linger until they feel inert and permanent, only then introducing new elements-- often ecstatic voices, piercing what seemed an impenetrable wall of sound. He uses long forms not to antagonize or subdue, but to unleash a welter of happy-sad feeling. It's the most gracious, forthcoming ambient music I've heard this year.
-PITCHFORK

Ahhh yes, the one so many of you have been waiting for. Brock Van Wey's productions have been gently lapping at the edge of the dub techno consciousness for the last couple of years with cherished releases on a host of premier outlets, including his own wonderful Quietus imprint. His dancefloor productions have appealed to heady listeners as much as the dancers, but it's those lush ambient compositions for Shoreless and Echospace that have set him apart from the rest of the crowd. Steve Hitchell found a soulmate in Brock's mindwashing style and paired his album of cloud-drift tones with a remix set of his own, adding extra instrumentation and rhythmic elements on a further disc of Intrusion remixes for this echospace release. Van Wey's disc of original tracks is designed for strictly horizontal listening, covering acres of ambient space with sighing strings, layered guitars and cotton coated synth pads in thrall to classic ambient electronica from the likes of Eno, Hans-Joakim Roedelius or Gas but with a forlorn spirit of its own making. Simplicity and subtlety are key here and Van Wey is master of both disciplines. Hitchell's efforts on the second disc remain faithful to Van Wey's vision, conjuring deeply hypnotic soundscapes with broad brushstrokes of ambience and reclined atmospherics, with the notable difference of pulsing waves of tidal bass and organic tape delay probing further into the ether. -Boomkat

With a faultless series of releases focused on ambient atmospheres and techno textures, Brock Van Wey — perhaps better known as Bvdub, has rapidly become an indispensable fixture of the deeper side of electronica. His latest long player is broken into two parts, with kindred spirit Intrusion offering interpretations of the six tracks in reverse order for the second part of the album. The album’s inspiration is hinted at in the liner notes which feature a poem by Chinese poet Wang Wei, the last line of which is adopted by Van Wey for the album title.

A serenely meditative collection of droning ambience, White Clouds Drift On and On makes studied detail of the repetitive fabric of woven pads, strings and silken noise. Van Wey’s floating compositions weigh in with a gossamer lightness despite an occasional mournful tenderness here and there. “I Knew Happiness Once” is a prime example of this, the yearning tones hint at some long ago emotional treasure buried by time, though the mood remains overall of hope rather than despair. On “A Gentle Hand To Hold” fragile guitar strings combine with angelic, breathy snatches of voices while vast, cascading pads rain down from the heavens. “A Chance To Start Over” takes these elements in reverse, the backwards guitars sucked up into an invisible vacuum, the strains of voices swallowed back into the mouths they came from as pulsing pianos key minute melodies. With the basis of White Clouds Drift On and On being comprised of broad sweeping pads and otherworldly, near religious sounding vocal phrases, these exploratory soundscapes would not sound out of place in a surreal nature documentary. In fact it is hard not to picture the equally wondrous and haunting images of Baraka while listening to this album.

Stephen Hitchell applies his Intrusion touch to the album, adding not only his own interpretation of the tracks but also some notably absent bottom end. The Intrusion “Shapes” are not the usual hallucinatory dub-influenced fare you’d expect from Hitchell; in keeping with the ambient nature of the album his versions are slow, ambling excursions into the deepest of atmospherics. Armed with just a kick drum, a light smattering of toms and some hats, Intrusion creates the same dreamy vibrations he is known for with his more uptempo releases on “A Gentle Hand To Hold,” though with the BPM here hovering around 70 here the amount of breathing space he creates is astounding. The dubbier side of Intrusion emerges on “A Chance To Start Again,” “Forever A Stranger” and “I Knew Happiness Once,” though these too remain purposefully sedentary. Van Wey and Hitchell each capture a masterful beauty in their respective parts on this album, one which is a modern ambient masterpiece and shows each producer in prime form. It will however be much easier to aurally digest by those who are content to lay back and gaze skyward while the two and a half hours of gentle undulating rhythms roll and wash over them. -Little White Earbuds

Album of the year mentions in The Wire, RA, XL8R, Pitchfork, Textura and many more... Classic!