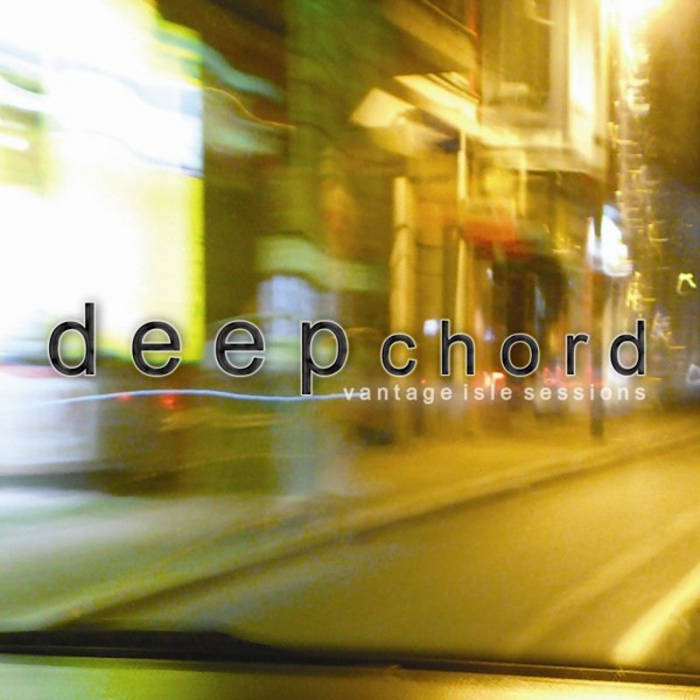 Deepchord have emerged from the shadows of their Motor City lair in a big way this year, unleashing their dubby techno constructs upon the public at a feverish pace. Previously appearing earlier this year on a hyper-limited triple-pack, their landmark ‘Vantage Isle’ album has been re-released on CD in an expanded fashion.

Awash in effervescent sheets of reverb and echo that evoke images of Detroit’s decaying urban landscapes as they dissolve into the ether, there’s a certain physicality to the album’s sonic vistas that is lacking from the output of other producers mining similar territory. Where contemporaries such as Deadbeat and Mikkel Metal gloss over the dub with a digital sheen, DeepChord wring their sounds from tangles of live wires and sputtering banks of effects, molding and shaping them by hand until they coalesce into living organisms. It’s a sonic space with one foot in the past and the other firmly planted in the not-so-distant future.

Often resembling a cross between Berlin’s Basic Channel collective and Detroit’s techno lineage, ‘Vantage Isle’ is less an album of individual tracks than a compilation of remixes. Working from a limited sonic palette rooted in the signature warmth of the analog technologies of yore, the collection plays out in true dub fashion as each of the artists involved offers their own versions of the same rudimentary riddim. The effect is similar in fashion to Rhythm & Sound’s classic ‘See Mi Yah’ series, with the basic template examined and reexamined from different angles.

Despite being cut from the same aural cloth, each of the tracks occupies its own niche, with the artist’s stamp firmly imprinted on the final product. The three DeepChord mixes feature lumbering rhythms underpinned by devastatingly deep bass pulses set adrift amid a sea of tumbling chords and skittering delay. Echospace – the collaborative project between Soultek and DeepChord’s own Rod Modell – is well represented with five reshapes showcasing their signature style, which is simultaneously both more ambient and more techno-oriented than anything DeepChord has committed to tape. Labelmate CV313 also impresses, turning in a complimentary pair of tracks that demonstrate the mysterious producer’s aptitude for producing storming waves of driving beats over a milky smooth ambience.

But it’s the contribution from Convextion that really stands out. Paring the beat down to a pulsing mass of kick drums and ruptured bursts of static, the Texas-based producer weaves writhing clusters of chords into the mix as yawning pads bathe everything in a warm, static-fried glow. It’s creepy stuff, but it’s also the visionary highlight of an album that stands tall not just among the glut of contemporary dub techno releases, but among the classics of the genre as well. All in all, ‘Vantage Isle’ is a tremendous achievement that will most likely be held up as a high water mark of the genre for years to come.
-Resident Advisor

Michigan’s Rod Modell makes immersive techno. It doesn’t quite fit into any specific genre mold, so his subtle, nearly anonymous tracks can slip by unnoticed. It’s easy to get lost in the microbial hiss, goopy dub timbres and rumbling muffle to miss the bass writhing in the fuzz or percussive tics cracking the drone.

On Vantage Isle Sessions, he again partners with Soultek’s Steven Hitchell as DeepChord. This new disc comprises 12 remixes by the duo of the elusive "Vantage Isle,” a track so impermanent it appears there was never a proper, original version. The 13th remix, smack in the middle of the disc’s sequencing, comes from the sole outsider: Gerard Hanson (Convextion). It may also be the best thing here. His version is by far the most submerged; strands of shuffling dust pile up on a cyborg samba, immersed in a hail of cut-ups, stray clicks and extended chords. Modell and Hitchell’s "Echospace Spatial Dub" is far more immediate. The closest thing to a straight dance cut, its bass is crisp and dry, looped in a slinky cycle that rattles along a taut trot, leaving the dub FX to plop and squish on the periphery.

The "Echospace Reshape" could pass as early-’90s ambient rockers Seefeel remixed by a Warp glitch-termite of comparable vintage. It’s a radian eight-minute sprawl that, thankfully, can’t decide whether it struts or churns, jets spurting and bass paddling in mutual confusion. The "Echospace Glacial" mix is practically a symphony of aquatic audio, complete with cascading water. The "cv313" reductions are the most surprising. The first applies a more variegated rhythm, its spatter and chipped blips a relief from the disc’s constant numbing throb. The second, the album’s closer, is all crackling froth and organ spume, blissfully coursing through the stereo field.

Modell is in solo mode on the weirder Incense and Black Light. From its title on down, this album has an after-hours feel. There’s more water, but now it sounds like it’s pebbling apartment windows instead of draining along sewer canals. A recurring bongo-like smatter, muted and almost incongruous, adds to the bedroom vibe. It’s as if some vintage space-age bachelor pad LP is spinning absent-mindedly with the volume turned way down. Only the tinniest percussion pops through the silence. Chimes shimmer, hi-hats lisp, steam crackles. Modell’s music always seems to be in this suspended animation, adrift and afloat in a majestic emptiness.
-Dusted Magazine

You might say that the sound of Deepchord results from one of techno's rock-hardest truths: Jack into the primordial 4/4 throb, the universal language of kick-drum, and the rest of your track's sonic spectrum is fair game for experiments of the maddest science.
Deepchord's lab book in this case is a dark-art manual for contacting the Jamaican-dub spirit world, a volume its Detroit-based progenitor Rod Modell was most likely handed by someone from Berlin's Basic Channel label. In its heyday, Basic Channel's style was often tagged "heroin house," a term coined ostensibly to account for the fleeting subgenre's pulsing silvery narcosis. If an opiate reference leaves you cold, however, you can think of it as "scuba house": dance jams for the diving bell. Let's face it, though. All along calling the sport scuba "diving" has been a way of covering up what it really is, and the properties it shares with Deepchord: the sensation of sitting at the bottom of the ocean for a long time and savoring the healing properties of otherworldly ambience. Along those lines, "Deepchord" and "Echospace" would be great brand names for long-range Navy Seal audio espionage gear, the kind you could use to make spine-tingling underwater field recordings of the sort of drifty, murmuring echoes and chthonic subbass tremors, that permeate Vantage Isle. And while the Deepchord/Echospace universe promotes a carefully vintage style, purist should note that it's not wholly analog. Mitchell professes his love for early digital synths, like the landmark Yamaha DX7. As he says in an interview with Resident Advisor, it's a hardware sound, one that distinctly separates it from the kind of computer-software plug-in steez that's the current benchmark for convenient techno production. Released on triple-pack last year as the latest and most epic of Echospace's near-cultishly coveted vinyl productions, it takes material played live at the Detroit Electronic Music Festival in 2001, and in the great spirit of electronic musical anonymity, allows it to be devoured by a wolf-pack of various pseudonyms and collaborations. If you simply heard the album and didn't read about it, you wouldn't know it was the same dubby minimal techno track thirteen times.

That's a testament to the unexpected broadness of palette that is left after it's been decided that you're amputating music down to its barest filtered flicker. The original dubby excursion gets eaten up, obliterated, leaving behind a beatless void on the fourth track, gets resurrected via hardcore throb on the standout seventh track, morphs into a refined and alluring nightclub pulse on the eleventh. Despite all the diversity, Vantage Isle does not, however, span the full geographical expanse of Deepchord's The Coldest Season, which went from tundra to valley to desert plain. Instead its sequence of inspired variations creates a pulsing, silvery rainforest of microcosmic depth. The listener ends up in a position kind of like the protagonist in Kafka's "A Country Doctor," who on first inspecting his young patient finds no physical incursion, only upon a second closer glance to discover a grotesque wound in the same place where there was just bare skin. Such is the effect of this strand of minimal electronics: With its enshrouded maternal heartbeats and diaphonous synths burbles it can lurk in the background of your aural space interminably, only to reach out and smack you without warning. Great for drug addicts, OCD-sufferers, and anyone else with over-acute hearing and/or insomnia.
-Prefix Magazine