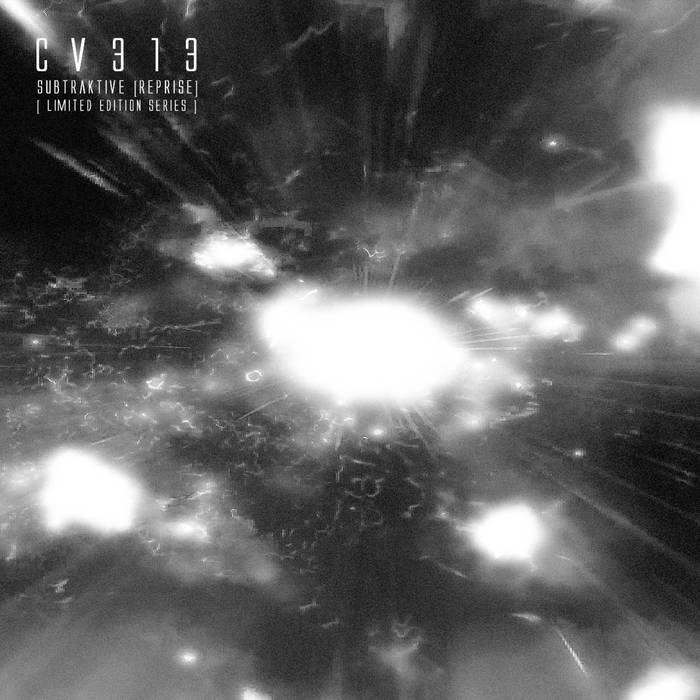 Paul Morgante Nothing will ever top the original subtraktive - however the etherscape, remixes and most importantly the remaster of the original (which takes the original and sends it to the edges of the universe) makes this an absolute essential composition. Favorite track: subtraktive [remastered].

thepeddler25 Amazing and beautiful music. Haunting and stimulating at the same time. Sadly, I never received the limited edition 4 disc set I paid for and the artists have never responded to my requests for assistance.

Lasse Hoile With musical greatness come great responsibility Echospace folks! I’m sure it will be worth the wait...

Originally released in small quantities on the esteemed Smallfish imprint back in 2007. An outline and blueprint of the cv313 sound; lush analog submersion enveloping one's mind into an altered hypnotic state. This release features the original in an entirely new dimensional surround mix utilizing heavier analog tape processing/saturation and remastered to a state of sonic perfection. Also featured is a newly remastered version of the subtraktive "re-imagined" edition and an unfathomable depth found in the unreleased version (reprise) culled from a live performance @ AIR (Toyko, Japan) This one rest somewhere in the upper regions of air beyond the clouds, reminding of those early Chain Reaction works of Vladislav Delay or the horizontal analog based dream-time experiments of Steve Roach.

This release also features three new never-before-heard epic analog incarnations from the ever-evolving variant guise in various forms of sonic conversion. An exciting new development is the inclusion of a long forgotten recording (from the archives) captured from the first ever live performance of the Intrusion project (along w/brock van wey) @ the Little White Earbuds Showcase (Chicago / March 2009). Captured from a blissful moment over a decade ago and it truly hasn't aged a single solitary second. This project encapsulates the culmination of nearly 12 years of recordings and manifest into an epic hypnotic state for the ages, an opus of sorts and in one word - timeless.

Pulled from the Smallfish archive (published: 2007):

So, am I pleased, thrilled and proud to be able to announce this next Smallfish 3″ CD release? You bet I am! Coming out of Detroit and shortly to be releasing an EP on the hotly tipped Echospace label run by Rod Modell and Steve Hitchell, aka Soultek, comes this anonymous piece of music from cv313 that is simply stunning. For lovers of Dub Techno this is an absolute must-have as it’s, once again, coming in a limited edition of 100 copies only – no represses! Subtraktive is a 15 minute track featuring the sort of aquatic depth and beauty that we’ve come to associate with the likes of Echospace, Basic Channel, Deepchord and the Meanwhile label and allow me to tell you that this piece just flies by. A deep, hypnotic and subtly building intro with an insistent high-end percussive sound leads you along, drawing you in to what inevitably grows into an-ultra refined 4/4 track with a steady, wonderfully atmospheric groove that’s drenched in reverb, metallic chord licks and tape delays. Just check the samples to see exactly what I mean… and if you’re a fan of this sound (and I’m pretty sure you all know that we here at Smallfish are *big* devotees of the purity of Detroit / Berlin Techno) you should consider this an essential release. Great to be able to put something out on CD as most of this gear comes on vinyl, so for those who feel they’ve missed out on some great sounds, here’s a perfect opportunity to enjoy some authentically deep Dub Techno pleasure. Many thanks to cv313 for allowing us to release this complete and utter gem. DO NOT MISS! Due to demand for this item we are having to restrict it to one copy per customer. -Smallfish, London, UK

As the highly respected fellas at Boomkat so eloquently stated:

"The original is a classic of the Echospace catalogue, merging beatless misty dawn atmospheres with an aura of heavy influences....like a Rhythm & Sound tape stretched out on a Jamaican beach until the edges begin to fray and curl unpredictably." Gorgeous stuff - HIGHLY RECOMMENDED -Boomkat