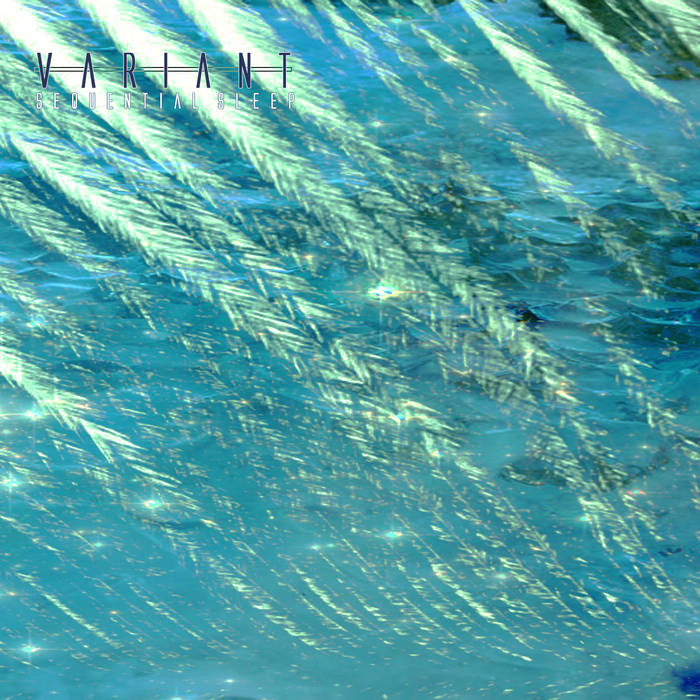 sean washburn 100% pure glurp. Bravo. I wonder if Robert has heard this...

Biff Johnson and Shelley Andrews Sublime, immersive, and mysterious. Very subtle pulse on Disc 1. The lows are folded into the amazing verb. On disc 2 the groove blooms and carries us away. Great continuation of the series. This is so much more than some genre based blips. This is what it is.Incredible!

We're excited to announce the secondary edition of Variant's "Sequential Sleep" (ver1.2) a beautiful complement to the original, but at the same time, entirely unique. Taking the foundation and elements of (ver1) and stripping it back into the ether, dubbed out and treated from reel-to-reel tape creating an almost vaporous atmosphere all its own, deep, organic and mystical. Utilizing a combination of purely analog mixing, a variety of field recording methods and dubbing it in real time, hands on the controls, no edits, no computer, just the ghostly harmonics and shivery bi-products you would come to expect of obsolete vintage electronics. The analog warmth has never sounded so sweet, mixed at antique modulation in Ann Arbor.

"Playing CD#2 of Sequential Sleep (ver1.2) and it's breathtaking. I really love this long form stuff. You're a master at this. Full immersion sound fields. Very organic. Robert Rich talked about "glurp" in an old Keyboards Magazine (about 1989 I think). He said this glurpy area is where sounds that are organic sound electronic, and electronic sounds seem organic. He strived to create a sound where you couldn't tell what was natural and what was electronic. You're in that zone. Am I listening to the wind, or am I listening to phased noise from a synth? I don't really want to know. I prefer just enjoying it and not over-analyzing it. Beautiful stuff." -Rod Modell


Behind and beyond these recordings therein lies the inspiration of its mysticism:

“WHEN WE pay attention to nature’s music we find that every thing on the earth contributes to its harmony. The trees joyously wave their branches in rhythm with the wind; the sound of the sea, the murmuring of the breeze, the whistling of the wind through rocks, hills and mountains; the flash of the lightning, and the crash of the thunder, the harmony of the sun and moon, the movements of the stars and planets, the blooming of the flower, the fading of the leaf, the regular alternation of morning, evening, noon, and night, all reveal to the seer the music of nature.” - The Mysticism of Sound and Music

The opium of openness by which all that dream, in wakefulness, or in sleep become one in the same dream...

Gently swimming on the sleep-trails of Max Richter’s phenomenal Sleep opus from 2015, Sequential Sleep is an ambient two-part CD release ‘made for dreaming, a sonic travelogue set in multiple locations within a winter forest. Everything in its natural environment is magnified with a 7:1 field recorder that captures the purest form of nature’. Utilizing newly developed forms of FM, granular and modular synthesis, Stephen Hitchell aka Variant has crafted a glistening LP, one which pulls you under in a wash of cloud, and texture and bubbling dub-space. Tip for the dub tech heads = Basic Channel, Gas, Pole etc. Sonic insomnia cures. -Bleep

Echospace man Stephen Hitchell has been devoting much time to his Variant project over the last couple of years, releasing no less than nine, straight-to-tape explorations in 2015 alone. Here, he continues his seemingly endless voyage into the deep space where ambient, sound design and dub techno meet. Sequential Sleep is a double-disc affair, with each CD boasting one long take on the fluid, spacey, becalmed and hazy title track. The differences between the two are subtle, but certainly noticeable: the slightly longer Granular Mix (hosted on disc one) feels more fluid and spaced-out, while the Modular Mix (presumably titled in honour of Hitchell's chosen production method) is bolder and louder, with more distinctively layered electronic textures. -Juno

Variant is Stephen Hitchell (aka Intrusion), who is part of cv313 and Echospace along with Deepchord’s Rod Modell. He has dozens of albums as Variant and, unsurprisingly, they’re all pretty similar, especially his newer releases which mostly consist of hour-long aquatic ambient dub tracks. I have several of them, and for whatever reason, this one has been hitting me the hardest. Very washed-out, slow-moving, weightless, but bass-heavy, fluid, and amorphous. One disc is the “Granular Mix” and the other is the “Modular Mix”, and there’s apparently another version of the same album (with the same title and barcode) that has dub versions of both. So what makes this Variant album stand out from the others? I’m not really sure. I feel like searching for the answer to that question will take away from my enjoyment of it. All I know is that it feels like being in some sort of weird flotation tank and the last thing I want to do is get out of it. Both discs are an hour long each and I thought they were too short. -/theanswerisinthebeat

written and produced by variant. mastered in echospace. mixed and dubbed out at antique modulation, ann arbor, mi.