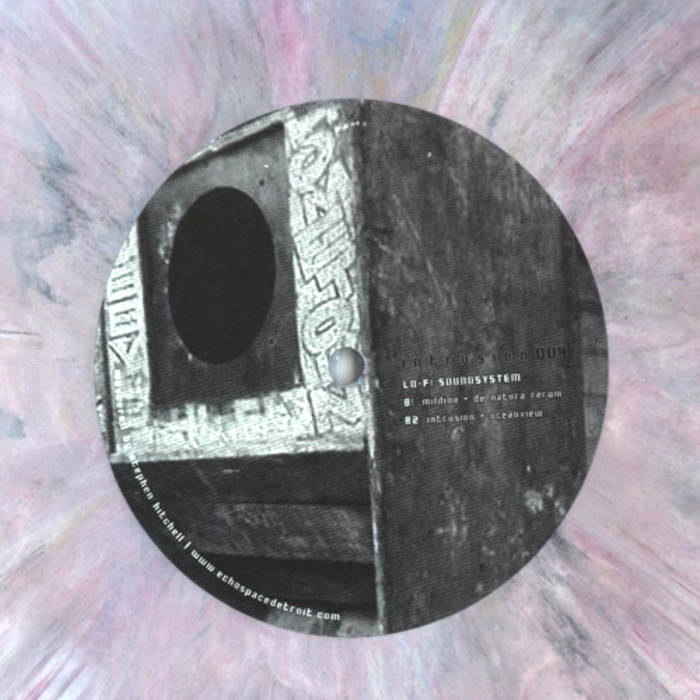 No rest for the wickid then as Steve Hitchell dives back into his Intrusion guise for four tracks of deep deep steppa's house and dub driven rhythms. His 'Velocity In A Minor' strides out with a tropical flavoured dub-house rhythm to delight any fans of this style, revolving about achingly well formed patterns shuffled with the dextrous touch of a proper rhythm magician. Lo-Fi Soundsystem's 'De Lions Den' is credited to an original artist from JA, but our instincts and yours may say otherwise. Either way it's an incredibly lush cut of wheezing melodicas and lurching steppas rhythms to do the business in fine style. On the flip Mildiou's 'De Natura Rerum', adds extra dub pressure to a heavy house rhythm, and Intrusion finishes with a faithful Rhythm & Sound tribute on 'Oceanview' sitting deep in smoky atmospherics and skanking movements. Another must-have for all Deepchord/Hitchell fans, seriously seriously deep.-Boomkat

All new Intrusion mini-compilation which kicks off in familiar Intrusion territory with the playful sequence of Velocity in a Minor, guaranteed to get you stimulated. However, things really start to get interesting with the next cut, as Stephen Hitchell lifts a scarce Lo-Fi Soundsystem, Jamaican 45rpm release from obscurity and an exclusive reworking for this release – an exciting mix of 4/4 rhythms and island grooves – this is where its at for sure, pure vibes all the way! Mildiou's 'De Natura Rerum' is compelling, pressing all the right buttons, an exceptional cut where the bass chugs along incredibly well, with all the right background atmospherics doing all the right things, you kinda want this one to go on longer, which is really cool. Finally, Intrusion rounds off the EP with 'Oceanview', possibly my favourite here, as I simply love these laid-back, tropical astro-funk basslines that Hitchell seems to be executing so well these days. This comes as a thorough recommendation to your e c h o s p a c e collection. -Interstellar Sounds, England

Stephen Hitchell continues to plumb the depths of dub-influenced techno to bring us further crucial low range soundscapes via the echospace [detroit] and Intrusion labels. His recent cv313 release “Sailing Stars” found him geting deliciously minimal with the cuts all employing a less is more approach to their output. Here Hitchell calls in assistance from kindred spirits Mildiou and Lo-Fi Soundsystem to further engage fans of dub-rooted house and techno. Intrusion’s “Velocity In A Minor” is a reductionist slice of dub house and one of the more restrained productions I’ve heard from Hitchell. The repeated chords are reverberated and bounced around in a small closet rather than a cavernous hall with the effect levels kept to a comparative minimum, leaving “Velocity In A Minor” slightly less dreamy than usual for an Intrusion production.

Everything I’ve read so far about this release states that the next artist, Lo-Fi Soundsystem, has released under a string of different names in Jamaica; but with no available proof of this and given the nature of the track, I’m guessing it’s someone from the echospace crew up to some sly name-foolery. In any case, “De Lions Den” is a skanking dub, crackling with burnt out vinyl scars and infused with a thick swampy dose of melodica. Timing in at a scant four minutes twenty it feels unjustly short, though that’s nothing a few repeated listens or back to backs won’t fix. Mildiou, however, is Frenchman Alexandre Lehmann, who also goes under the names Zzzzra and Unique. His “De Natura Return” fires off chords stabs in mechanical fashion, creating mushroom clouds of reverb around them, letting the tubby bass line carry the melody of the track. Intrusion returns with “OceanView” full of sloppy off-beat percussion and half time melancholic groove. As a companion piece to the 4/4 “Velocity In A Minor” it is its complimentary opposite, all languid and loose as opposed to the tighter, more structured grooves of the former. The digital version of the release features an Intrusion remix of Mildiou’s track, which adds some more warmth to the stark rhythms and peppers it with subtle, hand slapped drums. These tracks may not sound too different from any others in the Intrusion or echospace back catalog, but given their unquestionable quality they serve only to bolster the reputation of this fine label. -Little White Earbuds

This predictably splendid twelve-inch from Stephen Hitchell's Intrusion / Echospace stable serves up four cuts by Intrusion, Lo-Fi Soundsystem, and Mildiou that are aromatic and tropical in the extreme. The A-side's opener “Velocity In A Minor,” a funky tech-house stepper sprinkled with subtle dub production touches by Hitchell under the Intrusion guise ( Hitchell also records under the Soultek and Variant names), grooves mightily for an economical six minutes, after which Lo-Fi Soundsystem takes a rootsier plunge in “De Lions Den” with skanky chords and melodica-styled melodies flickering over a bass-heavy swing. Like a shark gliding through deep waters in search of prey, Mildiou's “De Natura Rerum” slithers through bass-heavy waters in classic Echospace tradition. Like “De Lions Den,” “De Natura Rerum” opts for a deep, Rhythm & Sound-styled dub vibe that owes as much to Berlin as it does Jamaica, while the second B-side cut, Intrusion's “OceanView,” is as dubbily deep as its title suggests. Listeners basking in the serene settings featured on recent Echospace full-lengths by Brock Van Wey (White Clouds Drift On and On) and Variant (The Setting Sun) might be surprised to discover how uptempo and aggressive the Lo-Fi Soundsystem material is by comparison. -Textura

Echospace presents a killer selection of steppa's riddims and tropical grooves. Intrusion's "Velocity In A Minor" is all about being playful with a sequence and splicing. Lo-Fi Soundsystem makes their first 12" appearance on Intrusion with a track given a second lease on life from its scarce 45 release. A mystical midnight groove reworked by Stephen Hitchell. Mildiou crosses into territory comparable to Intrusion's "Tswana Dub" or the atmospheric dub side of Rhythm & Sound, and "Oceanview" paints a picture of oceanic vapor haze. -Halycon, NYC

Another excursion into the dubbier side of techno here from Echospace sister label Intrusion with a compilation 12” that’s rocking it. Two tracks from Intrusion and one each from Lo-Fi Soundsystem and Mildiou (neither of which I’m familiar with I’m ashamed to admit, although I believe there may be a Jamaican connection with LFSS – I’m sure I’ll be corrected on that though!)

Anyway, Intrusion is up first with a romper of a track that has an almost Soultek vibe to it (like the cv313 actually). A grooving 4/4, distant echoes, funky basslines and the kind of production that’s aching to be heard on the dancefloor. Lo-Fi Soundsystem deliver ‘De Lion’s Den’ which really is a superlative slice of pure dub underpinned by a solid, effective kick and snare. Purist sounds no doubt.

Flip for Midiou which, I have to say, is my personal highlight of the EP. Uber-deep and subterranean to the max, this is a track that got right into my head as soon as I heard it and kept me coming back. Classic dub techno in some ways, yet it has enough personality of its own to shine through. And, ultimately, it’s just a very, very track and that’s the most important thing. Intrusion finishes up with ‘OceanView’ which has more of a downbeat flavour but sticks resolutely to the dubwise feel. In fact at one point I thought I could hear a melodica fading into the mix, but I think it was a combination of harmonics on the chords. Slow, low, reverb-drenched and pure, this is a slice of gold.

So, in summary, it’s a wicked EP and I believe that once again we’re on fairly limited copies of these. Be assured you can buy this with confidence if you’re a fan of the label in any way, shape or form. Pure class. -Smallfish, London