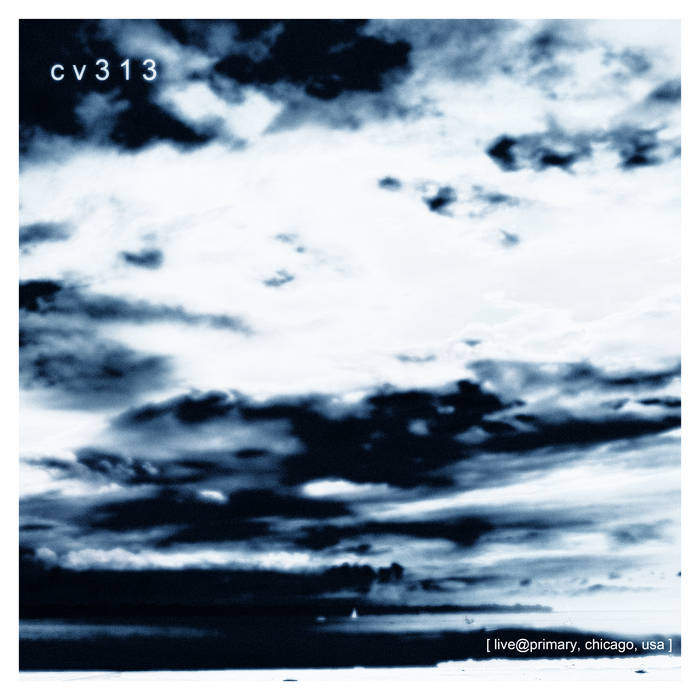 cool_fan_name every bit of deepchord/echospace related material shouldn't be missed.

Tom Rimshot A tasty electrified romp through what will certainly be a massive live document when the full album arrives. For now, this EP remains in full rotation in my car, perfect for night-time drives through the clear cold weather.

Live recording culled from the cv313 live show @ primary club in Chicago, USA on August 24, 2013. Recorded direct from the house mixer so there's some compression / limiting which couldn't be reversed.
Also, Includes 3 additional songs culled from a cv313 live show. Tracklisting is available in the credits section of each songs.

Echospace's Steven Hitchell is no stranger to live albums; this is his third live recording under the CV313 alias. Recorded in August 2013 at the Primary club night in Chicago, it sees the dub techno explorer laying down an hour long voyage into densely layered, multi-textured techno minimalism. While fans will recognise some loops and elements from previous releases, the ten tracks are almost new compositions; hypnotic, undulating excursions where elements drift in and out of the mix, only to return in newly processed form later in the CD. The result is warm, atmospheric and intoxicating exploration of live dub techno from one of the sound's most influential producers. -Juno

Full album release which features an epic live set from cv313, culled from a performance at Primary in Chicago, USA. Featuring unreleased tracks, versions of classics & plenty of unreleased cv313 content. The 'live' element is more present here than in past live performances, recorded utilizing myriad of analog circuitry filled with lo-fi warmth and sonic soul; the trademark of echospace. Those new to cv313 should expect a full spectrum journey deep inside the vortex, taking in dub and drone influences along the way. For fans of: Deepchord, Basic Channel, Echocord, Rhythm & Sound etc. Recommended! -Piccadilly

Hour long live performance by Detroit's dub techno maverick Steven Hitchell aka CV313. It was recorded live at Primary club night, Chicago on 24th August, breaking down to ten tracks, each built from numerous loops and elements of previous releases gelled with live instrumentation and processing inna DE:9 style. Recorded direct from the house mixer so there's some compression/limiting which couldn't be reversed. -Boomkat

Echospace present a one-hour performance from cv313 recorded in Chicago in August 2013. Ten tracks of drifting dub techno, drenched in reverb and moving through modes and themes, it’s as raw as it gets. Moving through as many as 70 different source points, the duo of Rod Modell and Stephen Hitchell move through the Echospace archive using their own tracks and unreleased nuggets of sound. Muted basslines, echoey synth stabs, droning hiss, it’s a deep and immersive listen. Eschewing track titles for numbered ‘Excursions’, it’s one to cherish. -Bleep

Slowly dragging you into the present with cv313. Live at Primary is a live recording broken down into ten tracks from Detroitian cv313 (aka Steven Hitchell). Composed of tunes, loops, samples, live instruments and all sorts of gubbins, this is a journey into the depths of techno. As it's live, all the glitches and mishaps add to the raw tension and energy through out the recording. Out on CD from Echospace [detroit].-Norman Records

If anyone thought that the American duo's productions are monotonous nature, should listen to "Live @ Primary".

While the album "Live Excursions" manifested draft Rod Modell and Stephen Hitchella at the beginning of its activity, so "Live @ Primary" shows how cv313 is today. The show, which was fixed on this record, held since August 24 last year in one of the most popular clubs on the electronic scene of contemporary Chicago - Primary.

Modell and Hitchell began almost avant-garde - the opening concert of "Excursion and" makes a fast rhythm, but densely striking bits are hidden in the distant background, and foreground rustling intertwined loops, creating an almost tribal pulse of the song. Everything is immersed in the stream even aggressive noise, which gives those whole radically noise'owe sound. "Excursion II" continues the threads - adding of each electrical discharge harsh chords and emerging from the bottom of the composition dronowy exhalation.

Then I mix slowly becomes much more dance character. At first the plan emerges steady gallop in classical style techno - and is accompanied by metallic effects, entwining slowly flowing passages dream-like synthesizers. ("Excursion 3 '). The same happens in the next passage, where the rhythm becomes even more clear and sewer flooding the sound waves of granular noise ("Excursion 4").

In the middle of the show Rodell and Hitchell begin to entertain deformations of the sound. At some point it stops pulsing techno - and when the rhythm appears again, this time maintained a more broken meter ("Excursion 5"). Over time come to this dub effects - the music fades, then fades away again, and all this resonates studio reverb native of classic records Lee Scratch Perry ("Excursion 6"). Jamaican appeal becomes even more pronounced when at some point in the distance you hear a wistful vocals of a black singer, giving the whole a gentle and nostalgic tone ("Excursion 7").

The most unexpected moment of the show comes when the US producers radically cut all the noisy sounds - and rapidly towards a modern twist ... disco rozpisanego to march melodic bass and piercing loops ("Excursion 8"). Really - this version of music Rodella and Hitchella've never heard! At the end of the show, dance energy rises to an even higher level - because DJs are turning to hot deep house, sunken but this time in dub disruption of tribalowym sznycie ("Excusrion 9" and "Excursion 10").

If anyone thought that produces Rod Modell and Stephen Hitchella have a monotonous character, he should listen to "Live @ Primary". In just over an hour performance at the Chicago club, both manufacturers successfully juggle different sounds and rhythms and moods and melodies, showing that the formula adopted by them playing there is room for experimentation, and spicy appeal, and dance unpretentiousness. We look forward to their visit to Poland! -Nowamuzyka Magazine

The second in an ongoing series of live cv313 performances released on CD, Live @ Primary presents a recording of a set at the Primary nightclub in Chicago in August 2013, the most recent and also the most radically different, dance-floor friendly of the live sets released so far.

It’s also one of those most highly evolved in the series too, as the massive info-dump regarding the contents of the disc listed inside the gatefold Eco friendly wallet attests. The disc is indexed into ten fully mixed tracks, but rather than providing names for each, the sleeve notes list out the numerous and varied sources and samples used for each one (a grand total of seventy discrete sources in all), ranging from well known cv313 tracks to forthcoming singles, previously unreleased mixes, tracks from the archive or outside samples of work from Deepchord, Soulek, Sons of the Dragon et al.

The result is an album that, whilst occasionally tangentially familiar, in essence presents ten completely new cv313 tracks. It takes patience and a keen ear to identify one or more of the six-plus sources indicated per track, especially since they are seamlessly woven together.

There’s no extended ambient introduction or gentle build up here, the album simply dives right in, immediately establishing the template for the set as a whole. Warm, muted bass pulses and sprayed by unusually grandiose fountains of static and hiss, while a relentless, train-track clatter and jolting percussion create the constant sensation of jolting, forward motion. The early tracks on Live @ Primary are, in their own way, every bit as evocative of the overwhelming hustle and bustle of overcrowded, neon-lit city centers as Deepchord presents Echospace’s immersive Liumin.

As Live @ Primary progresses it heads further and further into floor-friendly territory, the bass becoming more prominent, the atmospherics denser and the delay more pronounced, a superb build up before the break afforded by “Excursion VI”. It then enters an intense sequence of tracks as choppy loops and samples from a forthcoming single called “Anatomize” mix turbulently with extracts from the harder-edged “Standing Still,” the stormy “Clouds Beyond” and the electrically charged “Evocation” together with a repeated, eastern riff.

Hitchell allows the Chicago house flavors of his Soultek project to bleed through into “Excursion VIII,” which directly incorporates a segment of the rarely heard Soultek track “Lonely World,” one of the few Hitchell authored tracks to include a full vocal section, though it is absent in this live mix. Meanwhile “Excursion XI” bears a striking resemblance to “Irradiate,” another new track that can be found on the forthcoming Altering Illusions: Chapter One 2xCD set, though here it is presented in a faster, more angular and high contrast form. The set even has the decency to feature a definitive reverb-and-delay drenched ending, rather than simply fading to silence.

Like almost all of the new releases that were available to pre-order on the echospace [detroit] Bandcamp site, Live @ Primary comes with exclusive, digital-only content, in this case three further tracks taken from an unnamed live performance. Live @ Primary is a potent, swirling mix of sources with a relentless pacing quite unlike the other live performances. It’s a killer set, and easily the most compelling of the Live series to date. If you can secure a copy, do so without delay. You won’t be disappointed. -Igloo Magazine

Written and produced by cv313, performed live in Chicago, USA.