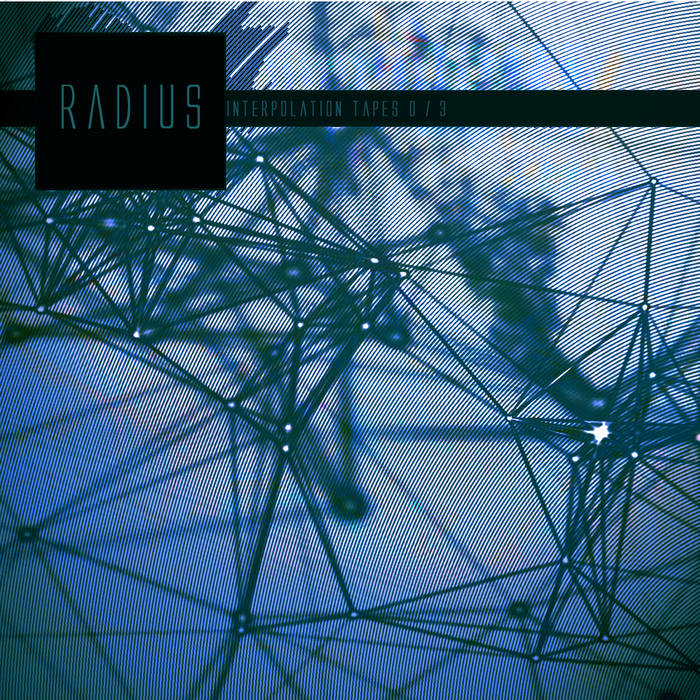 Biff Johnson and Shelley Andrews Incredible zone groove soundscapes at the absolute best there are anywhere. This is important in the scheme of things and it begs to continue as long as the galaxy exists.
A must have for any reason!!!! Favorite track: interpolation tapes [0.3].

UNO This is like being in a swimming pool under tons of liquid metal. Inmersive loops I could hear for hours! Favorite track: interpolation tapes 0.1 [cv313 rewire].

Μaπ Β The rhythm of 0.1 caught me right away, but it was the slow-burn of 0.2 that hooked me for good. Good for soaking the brain in some cool grooves, like going for a swim on a hot day. Favorite track: interpolation tapes [0.2].

This marks the final installment of Radius's "Interpolation Tapes" series, lovingly re-mastered in Echospace. All previously unreleased material culled from the vaults, these masters were one of the first Demo Tapes of the Radius project and where many of the sound sources for the series were conceived. We've spent months doing our best to restore the old tapes from our Tascam 688, an 8 track cassette recorder purchased and abused since 1992 and to our ears still sounds quite impressive even by modern standards. We've had nearly every component replaced and re-calibrated to bring this obsolete machine back to life, it's been a truly nostalgic experience re-visiting and redesigning these masters. The first mix is an unreleased version rewired and reshaped by the cv313 project, taking cues from the original source material and developing it into an ocean of analogue bliss!

We truly hope you enjoy reliving these magical times of music, very inspired by all that was happening in those years, there was just something in the air, an undeniable energy, long may it live on...

Press and Highlights on the Radius project:

Speaking of concealing brilliance in smoky space, here the principle is taken to far distant limits. Three tracks here are culled from Steve Hitchell’s cassette demos from the early 1990’s, led by the 16 minute “Ethersonic” which manages to be constantly shifting yet changeless, like the beating subterranean heart of a sleeping city; inhuman, incomprehensible, sublime in scale yet paradoxically comforting. Even by the standards of the Deepchord/Echospace axis, it’s a gorgeously enveloping embrace. The pleasure is prolonged by two equally long new remixes of the track by Hitchell and Rod Modell as cv313: they add watery sparkle and electric cracks, making new experiences that, while they can’t match the totalizing wonder of the original, stimulate other synapses. Of the two other old tracks, the distorting “Oscillation Range” in particular can teach supposedly lo-fi producers a thing or two about how much scope can be achieved with bare bones tech. -The Wire (November 2017)

"...Remembering that the basic recordings from the first album "Obsolete Machine" were made in the years 1996 - 1999, it is hard not to wonder how modern they sounded against the background of what was then created on the electronic stage. Yes, inspiration was the performance of Basic Channel and Chain Reaction, but Stephen Hitchell developed these influences in a unique way, giving his works a completely different character. This unique combination of rough sounds with muffled background and meditative atmosphere distinguishes his work from European colleagues to a large extent. No wonder that in the following decades Echospace and DeepChord became the most important bastions of this kind of music." -Nowamuzyka Magazine (2018)

"Echospace marks its first release of 2017 with a lost classic from Steve Hitchell’s Radius project. He had originally sent these tracks to Rod Modell back in 2001 for possible use on the Deepchord label, but they were never released and gathered dust in the vaults ever since. With tracks like the woozy ‘Ethersonic’ clocking in at over 16 minutes, the more stripped back ‘Etherscapes’ resounding to an ethereal sensibility and CV313’s evocative, wistful takes on ‘Ethersonic’, this is an essential dub-techno record!" -DJ Mag

*Featured on the legendary Steve Barker's "On The Wire" (EchoSpace On The Wire show) on BBC Radio's longest running program.

written and produced by radius [1993-2003] engineered, restored and redesigned from analog tape in 2017-2018. redesigned and reshaped by cv313. mastered in echospace.