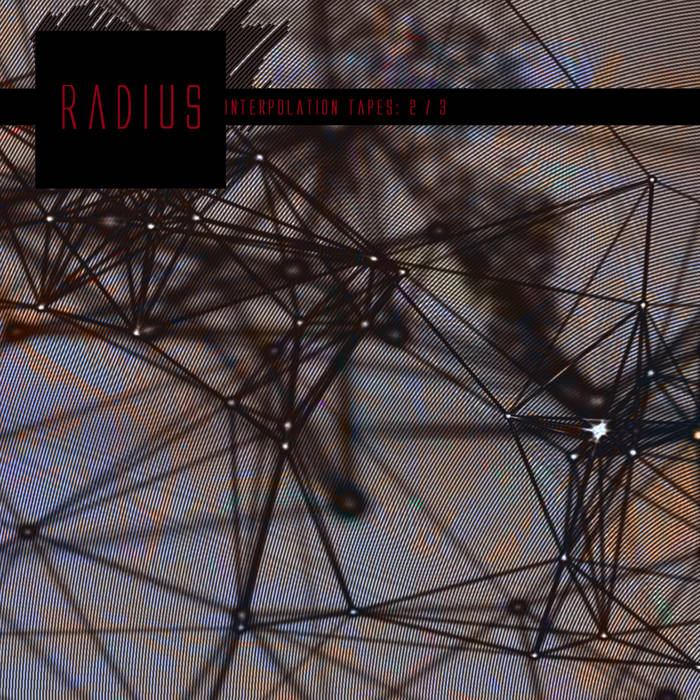 Biff Johnson and Shelley Andrews A sage once said " To age is to become young again ". The sounds of yore have now come to the fore. Really wonderful trance like echo-dubient masterpiece and this only addresses the digital version. We should all know by now how awesome the discs are for sonic immersion !! The CD finally arrived and the sonic palette is strong and mesmerizing to say the least.. Totally bitchen !!! Favorite track: interpolation [eight].

Radius's "Interpolation Tapes" (Restoration Two) is the second part in a series of three releases featuring unreleased material culled from the vault of the long out of print Radius project, an ageless analog tapestry of sound. This release features 8 tracks, revisited and restored from analog cassette tapes with recordings conducted from 1994-2001 with nothing but analog/digital hardware. The original source tapes had aged, warped and degraded and as a result we've preserved the best segments, sampled and reprocessed them into an entirely new sonic spectrum. It's been a truly nostalgic experience re-visiting and re-arranging these masters, regardless of the time passed, there's so much depth and organic movement, it nearly breathes in slow motion. When considering the limitations of hardware in the era these were recorded, they've truly aged like a fine wine.

From our hearts to yours.

"Towards the back-end of 2017 Echospace [Detroit] released Obsolete Machines, a quietly impressive set of Detroit minimalism by the little-known Radius. It soon transpired that Radius was a moniker which Soultek/Echospace bloke Stephen Hitchell had recorded under in the ‘90s and early ‘00s. The Obsolete Machines material was actually submitted for release in 2001, but due to some miscommunication the tapes never made it to the pressing plant. Fast forward seventeen years and Echospace [Detroit] have cleaned up another set of the old Radius material for ‘Stage Two’ of their Obsolete Machines releases. The five cuts here are wistful, grainy minimal techno of the sort that would get Nicolas Jaar all hot and bothered. Well worth the wait!" -Bleep

"Archive release from cult Detroit label Echospace. An unreleased classic emerges with newly remastered content from Radius's celebrated "Obsolete Machines" double album & two of the most epic creations featured on the "Interpolation Tapes" CD series, available for the first time ever on vinyl format. Many of the songs featured in this project were initially sent to Rod Modell & Mike Schommer shortly after they launched their brilliant Deepchord label in 2001. Recorded from 1993-2000, they were incredibly kind in saying it was the best demo they had ever heard and passed it on to Octal records for release. Sadly, that didn't materialize and since then the masters have been collecting dust in Rod's cassette rack for nearly 20 years. Echospace have spent months restoring the old tapes from a worn out Tascam 688, an 8 track cassette recorder purchased and abused since 1992 and with nearly every component replaced and re-calibrated!

Slow, thick, powerful meanderings into the very centre of the dubosphere; there's so little going on but so much to hear! Weightless in parts, crushing in others, like traversing from outer space to Mars. Rich with static interference and alien frequencies but humanized via the physical and tangible medium of tape; this is pure sonic art and a true classic from the ES vaults. Do not sleep!" -Piccadilly

"More unreleased and remastered content from dub techno veteran Steve Hitchell aka Radius' Obsolete Machines and Interpolation Tapes projects. Said to have been restored from cassette live recordings between 1995-2000, the project has been on hiatus since 2001. The demos were initially sent to Rod Modell and Mike Schommer shortly after they launched the label, but passed it on to Octal Records for release. Sadly, that didn't materialise. Modell and Schommer dedicated a generous portion of their time remastering the release. From the introspective and personal dub of "Soul Rotation" (unreleased tape mix), the glacial and cavernous immersion of "Culture" (original 12" mix) and not to mention some powerful soundscapes from the great north of Michigan in the form of "Interpolation Tapes" Parts One & Six." -Juno

It is a great joy for all fans of Echospace and DeepChord that Stephen Hitchell returned to his old registrations and brought them back to life. It's mainly a few hours of great music from the border of dub, techno and ambient, but also extremely important (and so far hidden) fragment of the history of new electronics. Thanks to these publications, we know that the Chicago producer created a very beautiful and moving version of the Basic Channel canon at exactly the same time as the Fluxion, Porter Ricks and Hallucinator releases, published by Chain Reaction, were released. -Nowamuzyka Magazine

written and produced by radius [1993-2003] engineered, restored and interpolated from analog tape in 2017. mastered in echospace.