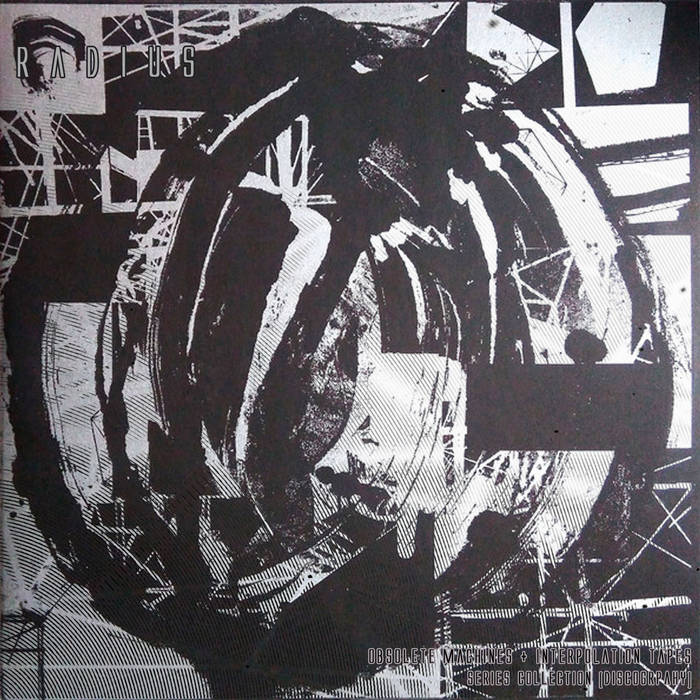 Mono Peninsula / Photophob Pure sonic bliss from start to finish. Radius delivers some of the deepest, most immersive dub techno soundscapes i had to pleasure to encounter so far. Highest recommendations from my side. Favorite track: interpolation [restoration 0.2].

Μaπ Β From start to finish, the Radius project (and its many--alter-egos? offshoots? children?) has a total hook on me. I remember first hearing a version of Ethersonic on a podcast/radio show. It's been at least a few years and I'm still jamming out to one thing or another from this collection.

This mammoth sonic collection features the entire interpolation tapes series (0, 1, 2, 3), obsolete machines (alchemy vinyl masters + variant reworks) and the tape session remasters of obsolete machines [stage two] w/an unreleased mix by cv313. Includes both double CD albums and all 5 of the single CD releases including the vinyl remasters, nearly 20 years of recordings compiled into one collection. This is the sonic world of radius in its entirety, a deeper than the ocean floor sound experience unlike any other. As the sonic aficionado's at Boomkat so eloquently stated, "Oceanic, intergalactic, timeless; total manna for dub house ambient fiends!"

Speaking of concealing brilliance in smoky space, here the principle is taken to far distant limits. Three tracks here are culled from Steve Hitchell’s cassette demos from the early 1990’s, led by the 16 minute “Ethersonic” which manages to be constantly shifting yet changeless, like the beating subterranean heart of a sleeping city; inhuman, incomprehensible, sublime in scale yet paradoxically comforting. Even by the standards of the Deepchord/Echospace axis, it’s a gorgeously enveloping embrace. The pleasure is prolonged by two equally long new remixes of the track by Hitchell and Rod Modell as cv313: they add watery sparkle and electric cracks, making new experiences that, while they can’t match the totalizing wonder of the original, stimulate other synapses. Of the two other old tracks, the distorting “Oscillation Range” in particular can teach supposedly lo-fi producers a thing or two about how much scope can be achieved with bare bones tech. -The Wire

"The mystery of light and darkness."
The recently released album "Obsolete Machines" showed us the first installment of recordings, which Stephen Hitchell created under the name Radius between 1996 and 2001. Now the time has come for the next archives. This time they consist of three albums labeled "Intepolation Tapes". Hitchell has devoted almost the entire year to recover from old tapes once recorded songs. He used the old samplers, thanks to which the recordings kept their analog aspect.

The first CD from the series contains four long songs. First, we get a composition slowly developing from the reduced ambient to the speeding dub-techno with the hooting synthesizers in the main role ("Interpolation 1"). Then the music becomes as if played back in slow motion, resulting in a tarry dub, filled with tectonic convulsions ("Interpolation 2"). The center of the disc is the most raw and thrifty piece, banging with the massive techno rhythm ("Interpolation 3"). The set is crowned with an underwater version of such a play, focused on overflowing waves of oniric synthesizers ("Interpolation 4").

The third album from the collection is already fully sound metaphysics. "Interpolation 13" is particularly impressive - one of Hitchel's most beautiful and mystical compositions. There is not much in it, but the coil of bass streaks and corroded waves immersed in loud noise creates a deeply moving mystery of light and darkness. "Interpolation 14" is a new version of the previous work, enriched with vibrating electronics and rhythmic pulse. Calming and soothing after these deep emotions brings a bright and warm final piece - "Interpolation 15".

It is a great joy for all fans of Echospace and DeepChord that Stephen Hitchell returned to his old registrations and brought them back to life. It's mainly a few hours of great music from the border of dub, techno and ambient, but also a very important (and so far hidden) piece of the history of new electronics. Thanks to these publications, we know that the Chicago producer created a very beautiful and moving version of the Basic Channel canon at exactly the same time as the Fluxion, Porter Ricks and Hallucinator releases, published by Chain Reaction, were released. -nowamuzyka magazine


*Featured on the legendary Steve Barker's "On The Wire" (EchoSpace On The Wire show) on BBC Radio's longest running program.

The good folk at Echospace have combed through the vaults and unearthed a gem here. Prior to Stephen Hitchell’s releases under monikers including Soultek and Intrusion, he spent the second half of the ‘90s crafting off-the-cuff analog dreamscapes as Radius. Obsolete Machines never quite made it to the pressing plant back in 2001, and has spent the past 16 years gathering dust. Why we’ll never know, but what’s for certain is that Hitchell has crafted music of considerable beauty here. The richly realised Detroit techno that has been the backbone of Hitchell’s other projects here comes as if beamed in from the bottom of the sea, with just as much space given to murky ambiences and cavernous reverberating space. Comes with a bunch of contemporary reworkings by Hitchell and Echospace boss Rod Modell under their cv313 banner. -Bleep

Here’s a beauty - a real keeper and a treat for echospace [detroit] fans. Five cuts (arguably the highlights) lifted from the epic Radius ‘Obsolete Machines’ 2CD, luxuriously spread across two pieces of vinyl, and presented in lush screen-printed sleeves in an edition of 500 copies.

Radius is of course one of Stephen Hitchell’s many handles which include Intrusion, Phase90, Variant, Soultek and half of cv313 alongside Rod Modell. For me, this music can just play on forever and never demands any effort or very much attention - it just does its thing so elegantly. ‘ethersonic’ is like once the sounds have left the machines it just lives in the skies and won’t come back down, delicately twinkling and fluttering somewhere in the ionosphere. Or like entering a room after an echospace track was played in there and its ghost is loitering there, still playing once you hit stop - as though once released into the air it were a gas rather than a set of vibrations. ‘etherscapes’ slivers along, powered by sparse percussion with a blisfully stoned momentum while ‘Oscillation Range’ is like submerging into an endless deep blue ocean where rays of sunlight refract on a coral bed made of silver.

On the second slab of vinyl we get the cv313 reshape of ‘ethersonic’ that sounds so delicate and brittle it feels like it’s literally dissolving and rebuilding itself as it plays for almost twenty minutes. The cv313 reprise resides over on the flipside, building from its sparse beginning into a gently rippling and slow bubbling cut that shuffles and trickles out of the speakers.

Across all tracks there’s an eerie sense of presence and that sense of the familiar which I’m sure some critics may find to be a negative, but within the parameters Hitchell sets himself, there really feels like there’s infinite space with which to become immersed, lost and explore. If you dig those old Scion Versions 12”s and the more ambient house leaning side of dubby techno then you know what to do. Most tranquil. -Norman Records

It's been a quiet year vinyl wise from the Echospace camp, but they've just managed to squeeze out a killer release in time for the festive season and the cold dark nights. An unreleased EP from the Radius project, lovingly re-shaped by cv313 and given some extensive mastering at Alchemy London. Culled from cassette tapes and recorded live between 1995-2000, this is the purist inception of the Radius project, featuring solely hardware and sequenced with the cult Commodore C64 midi hub. This project was initially sent to Rod Modell & Mike Schommer shortly after they launched their brilliant Deepchord label in 2001. They were incredibly kind in saying it was the best demo they had ever heard and passed it on to Octal records for release, which sadly didn't materialize and since then these masters have been collecting dust for nearly 20 years now. After spending months restoring the tapes from their Tascam 688 the release, thankfully stands up, truly impressive even by modern standards (that is of course, if you can get past the tape hiss). Immersive and ambient in places, giving way to crushing walls of echo and flux, with plenty of electrostatic discharge littered amongst the dub-techno roots and humongous reverb chambers. For fans of Deepchord and Echospace, this will be a treasured release, and newcomers to this vast world harbored by Rod Modell can too revel in the undiluted goodness of this restored relic. A masterpiece! -Piccadilly

Towards the back-end of 2017 Echospace [Detroit] released Obsolete Machines, a quietly impressive set of Detroit minimalism by the little-known Radius. It soon transpired that Radius was a moniker which Soultek/Echospace bloke Stephen Hitchell had recorded under in the ‘90s and early ‘00s. The Obsolete Machines material was actually submitted for release in 2001, but due to some miscommunication the tapes never made it to the pressing plant. Fast forward seventeen years and Echospace [Detroit] have cleaned up another set of the old Radius material for ‘Stage Two’ of their Obsolete Machines releases. The five cuts here are wistful, grainy minimal techno of the sort that would get Nicolas Jaar all hot and bothered. Well worth the wait. -Bleep

More unreleased and remastered content from dub techno veteran Steve Hitchell aka Radius' Obsolete Machines and Interpolation Tapes projects. Said to have been restored from cassette live recordings between 1995-2000, the project has been on hiatus since 2001. The demos were initially sent to Rod Modell and Mike Schommer shortly after they launched the label, but passed it on to Octal Records for release. Sadly, that didn't materialise. Modell and Schommer dedicated a generous portion of their time remastering the release. From the introspective and personal dub of "Soul Rotation" (unreleased tape mix), the glacial and cavernous immersion of "Culture" (original 12" mix) and not to mention some powerful soundscapes from the great north of Michigan in the form of "Interpolation Tape" Parts One & Six.
-Juno