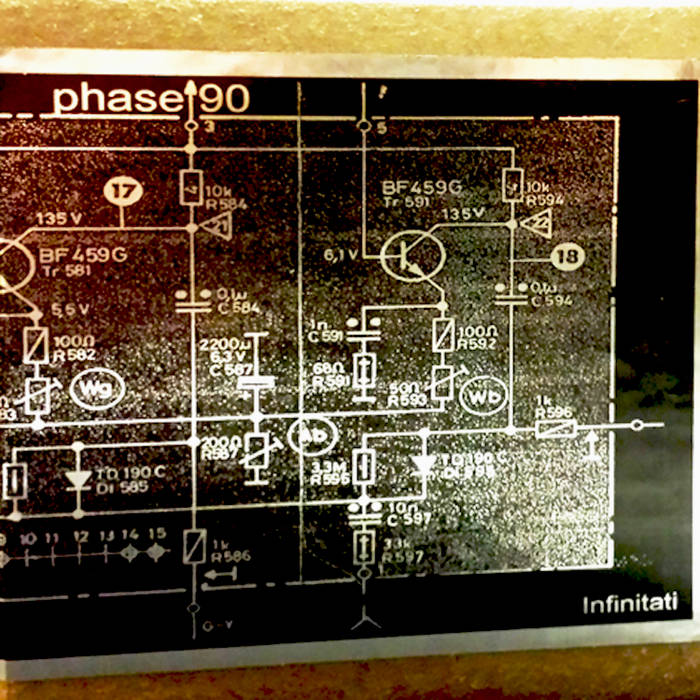 Alec L. Critten Deep and heavy, this album is a masterful example of an artist employing minimalist elements to their maximum potential. While a track may only have echoing synths and a kick drum, the phase90 project uses these ostensibly repetitive elements to construct something more than the sum of its parts. Highly recommended for anyone who enjoys quality techno late at night. Listen closely. Favorite track: ango.

asaghost As I hear it, sounds as a deep wild odyssey on a virgin Earth...Natural Spirit..

Tom Rimshot Easily one of the best things Hitchell has produced to date. Spooky, mutant and truly an extension of the depths reached by his cv313 alias. Essential in every possible way.

Otter This is a really special piece of music. There is a sense of clarity, the feeling of a lucid thought, and I can't think of any other music I've ever heard that could project this. Really perfect for good headphones. Favorite track: vinci.

"Steven Hitchell rekindles his Phase90 alias with an absorbing reshuffle of its debut album, 'Infinitati' including unreleased and remastered material.

This is arguably some of the strongest material from any of his myriad pseudonyms, mostly thanks to an sort of frayed, agitated approach to his rhythms, preferring knotty, sparking shuffles and delicate dub bounce rather than his patented heavy trodders.

The atmospheres too are dealt with a nimble hand, full of organically diffused melody and dusty chain reactions occurring around the sound-sphere with dreamy, elusive quality.


"A reissue of Echospace’s Phase90 project with remastered audio, unreleased material, and packaging handled by Lindsay Todd. Inspired by field recordings from Calvary Cemetery this is haunting music, acidic dreams for those who enjoy a walk on the wrong side."
-Fact Magazine (Release of the week)

"Phase90 is a solo project from Detroit artist Stephen Hitchell, better known for his solo work as Variant and for making up the numbers in dub techno groups Echospace and cv313. Debut album Infinitati is a spacious and haunted piece – dark, ghostly, yet not exactly sinister. This is a great introduction to the aquatic world of echospace as a whole and builds upon the foundations laid down on LP's such as The Coldest Season and the various incarnations of the ever evolving echospace production unit. Perfect winter listening for anyone into The Detroit Escalator Company, Basic Channel or the Modern Love label." -Bleep